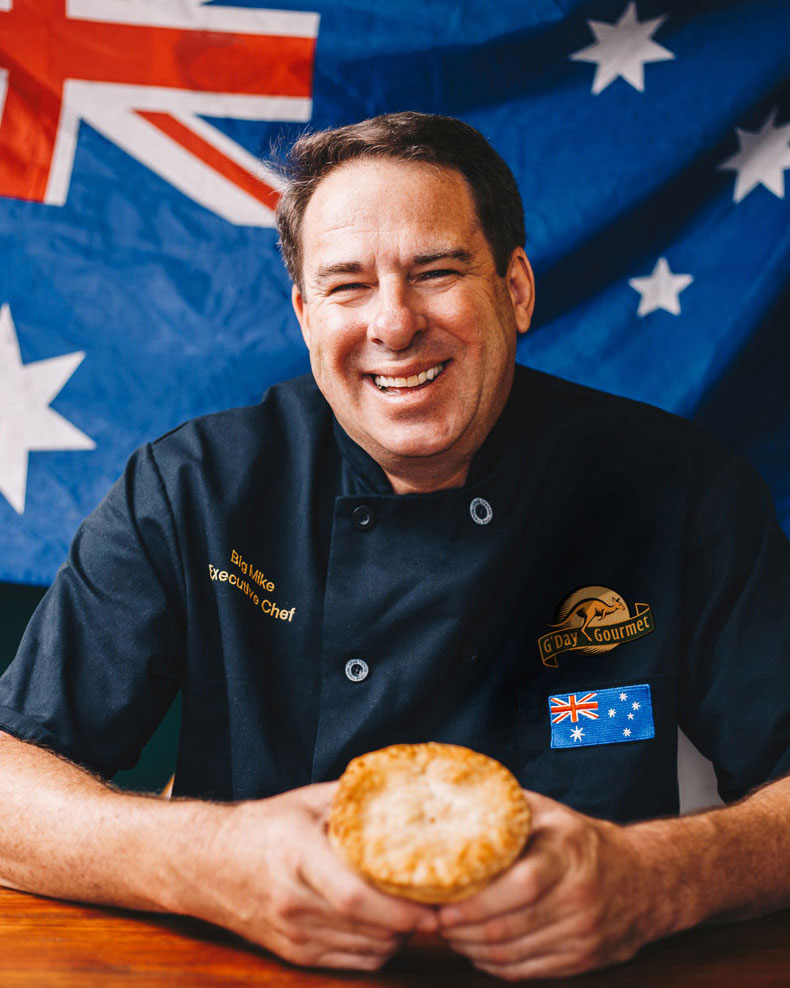 Article republished from “Meat + Poultry” on 12/23/21 at https://www.meatpoultry.com/articles/25969-down-under-delicacy

Michael Peacock recalls his early years in Australia where he relished school on Fridays because that’s when he and his classmates had delicious meat pies delivered from a local tuck shop (bakery/deli) as an end-of-the-week celebration.

When his family moved to the United States in 1980, the then 12-year-old lad longed for those meat pies his parents made from generations-old family recipes, but he couldn’t find anything like them where he now lived. He sought out a job in a restaurant setting and ended up as the dishwasher, where his diligence earned him cooking tips and culinary advice from chefs in a five-star restaurant who admired his dedication. Later, he spent 12 years as a corporate sales account manager before laying out his business plan for The Flying Pie Guy, based in Ewing, NJ.

“My idea was to purchase a food truck and learn if there was a market for the Aussie pies,” he said. “It was important for me to learn who the customer really was and what they really wanted in terms of taste and convenience.

“The first obstacle I encountered was that I knew nothing about a food truck and what I needed in the way of equipment. I sought out some professional advice and purchased a 27-foot Freightliner and had it equipped with an 18-foot kitchen, two propane convection ovens, a deep fryer, hot holding cabinet, refrigeration and freezer space, a beverage cooler…and an Aussie flag emblazoned on the unique and colorful wrap job of the vehicle. Then I hit the e-commerce system and started attending festivals and events. I was learning quickly that customers wanted a hearty meal and quick service. I also got to know the experience of working in an enclosed area that was always very hot or very cold.”

Peacock said he was doing well and teamed up with local breweries and even added two employees to run the food truck while he joined them for larger events, like the one at which he sold and served 1,600 of the handheld pies. When the COVID-19 pandemic hit, getting help was virtually impossible, transforming the enterprise back to a one-man traveling road show.

He bought a closed Italian restaurant in Ewing, near Trenton, in 2018 that was equipped to make his specialty pies in large quantities. Then in 2020, he became the first contestant on a Philadelphia television show called “The Wolf PAC” (President’s Advisory Council) that entertained promising business venture candidates and rewarded them with investment prizes, including mentoring.

“One of the questions they asked was if I would be willing to change the name of the business from The Flying Pie Guy to something else in order to grow the venture,” he said. “I lamented about the name rebrand but said I would do it. I won the investment prize, and they suggested the name G’Day Gourmet, which I adopted.”

Using those family recipes that feature a flaky buttery crust, the pies are made with organic Australian beef and lamb and free-range chicken, as well. The variety intrigues with versions like beef-bacon-cheddar, lamb and rosemary, chicken and leek, spinach and feta, and a top seller called steak and stout (beer).

G’Day Gourmet also offers limited time specials on the menu. One worthy of note is called the “Tradie,” which Peacock describes as a tradesman or working man’s meal, one that’s filling and tasty and easily munched by hand from the paper bowl in which it is served. He notes that while the Aussie pie is normally eaten with the hands, many Americans like to eat them with a knife and fork.

The food truck sets up at about four events and festivals a week and can handle up to 1,600 pies. Catering has also become a significant part of the sales volume.

Service from the food truck is very fast, about 10 seconds from a customer’s order placement to a ready-to-eat, hot pie on the
counter. He also sells the pies frozen to take home – offering four-pie packs and a sampler of all variety of pies, including sausage rolls.

Peacock, 52, typically serves customers a plain pie, but will also serve it “stacked” with mashed potatoes and gravy on top and, if they like, an order of peas to top everything off.

G’Day Gourmet is booked for most events three months out and weddings and corporate events are often booked six months in advance. More details are shown on his
website gdaygourmet.com.

“I did most of our social media promotions but have recently brought on a firm to handle that end of the business,” he said. “I have also gone to co-packers who now produce my pie meats under USDA inspection and have even gotten a company in Maine to produce my pie dough. That was a tough order since the higher butter content makes mixing the dough difficult and the larger bakeries did not want to do it.”

G’Day Gourmet does its own order fulfillment and is transitioning the former production building into a location for individual hot and frozen wholesale order pickup.

The business is located close to the “cheese steak capital” of Philadelphia. Not long ago, he served one of his pies to Tony Luke Jr., who many regard as the cheese steak king in the United States and who operates 28 of his restaurants under the name Tony Luke’s.

In a subsequent conversation with Luke, he asked about making a pie called a roast pork Italian, which is a strong seller in the
Philadelphia region. Luke told Peacock that if he made his own version and Luke liked it, he would endorse the specialty pie. The pie is
filled with pork roasted for six hours in a wet garlic rub and served with sharp provolone cheese. Tony Luke liked it.

This fall, G’Day Gourmet products became available frozen in several supermarket chains in the area. One supermarket is considering selling them hot from the deli counter.

In addition, the Aussie meat pies began selling at the NFL Philadelphia Eagles home games during the 2021 season. In midSeptember, Peacock inked a deal with the Eagles left tackle Jordan Mailata, a SamoanAustralian, to be the company spokesman.

As G’Day Gourmet continues to grow and expand, Peacock is moving forward with his plans to share his homeland specialty dish across the United States and into Canada as well. If expansion continues, the food truck of the former Flying Pie Guy may be retired and used as a promotional attraction at special events.