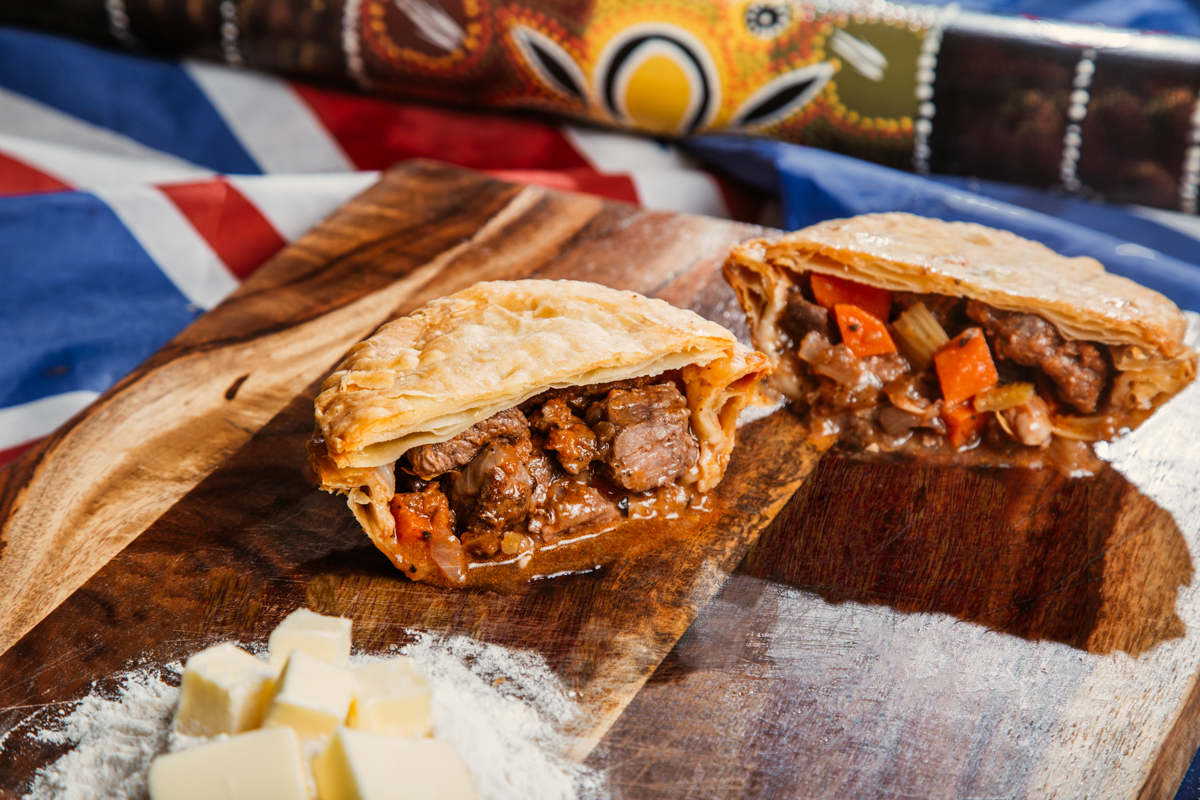 When you want to learn more about a country’s culture, one of the first places to start with is their food.

And if it’s Australia, Aussie Meat Pies is the ultimate food unique that is so to the country.

In fact, Aussie meat pies are widely known as the national meal in Australia.

Just what is an Aussie meat pie?

It’s a super hearty and deliciously addictive food that is part of the history of this fun country. Aussie meat pies are similar to the pot pies found in America and other parts of the world, carrying yummy meat, vegetables, and gravy filling within a flaky pastry crust.

Let’s learn a little more about the Aussie meat pie and why it is so popular in the Land Down Under.

An Australian meat pie, often known as Aussie Pie, is a food icon everyone enjoys when heading to the Land Down Under for a visit. Just like hamburgers and hot dogs are a hit in America, you’ll find Aussie pies in every nook and corner of this country.

Meat pies are a must-have at Aussie football matches, a perfect add-on to pints in a classic pub, and a one-dish-fits-all solution for anyone seeking a hearty lunch or a satisfying dinner.

There are a bunch of different ways to make an Aussie meat pie, depending on who decides to make it and the types of fillings inside. It has a short crust pastry or a flaky butter top. Inside, there is some filling made out of meat. You can choose the meat of your choice, along with some veggies and gravy.

All these ingredients come together to make a tasty meal for anyone who wants to try something new. It can be compared to the American Shepherd’s Pie or Pot Pie, though it tends to have more meat inside and can go well with ketchup or another tomato sauce. Add some chips as a side, and you’re good to go.

Our love for the dish begins early, thanks to the long-standing tradition of “lunch order Fridays” at many Aussie public schools. On these special occasions, the local tuck shop (a tuck shop is a deli, cafe or bakery) takes morning orders from schoolchildren and returns in time for lunch, hauling the hot savory pies in their traditional brown paper bags.

Meat pies are a tried-and-true dish, said to have originated in the second century AD in Europe when butchers realized pastry dough served as the perfect means to cook and hold meat. Records of the Middle Ages tell of peddlers hawking meat pies in the streets to people of all classes, from priests to peasants, as well as rulers commissioning cooks to bake large batches for their royal families.

The great meat pie tradition reached Australian shores in 1788, around the same time as the First Fleet, the name given to the original 11 ships from England that founded the first European colony in New South Wales. In the early 1800s, when the first steam-powered wheat mill opened in Sydney, the official down under style pie emerged, achieving a new level of deliciousness thanks to the addition of world-class Aussie meats, a protein considered to be in the same class at Japanese Wagyu beef.

Not long thereafter, pie carts could be found on street corners in nearly every Aussie city, as well as in bakeries on main streets of most rural towns. These classic carts were originally horse-drawn trailers featuring a concession-style window, along which customers stood to eat their pies.

The Adelaide metropolitan area in South Australia has hosted pie carts daily since the 1870s, many carrying the classic pie companion drink, fresh ginger beer pumped from kegs. By the 1880s the down under style pie tradition was in full swing, with 13 separate pie-cart operators vending near the Adelaide city center.

When Should I Eat an Aussie Pie?

In Australia, the words “meat pie” and “pie” are used interchangeably. If you ask for a pie at a restaurant, for example, you’ll be given the standard beef or steak option. There isn’t really a slang term that goes with this, and often the only question the server might ask is whether or not you’d like some tomato sauce.

If you are visiting Australia for the first time, we highly recommend you try an Aussie pie as soon as you can! You will love these pies and may frantically start looking for a good recipe the second you get back home! These pies are super tasty, and Aussies love to devour them all the time.

Traditionally, Aussie meat pies make an excellent option for supper, with plenty of meat and vegetables to fill you up after a long day at work. They can be made and cooled down to take to lunch as well, with a bit of ketchup on the top to add to the flavoring. Add a bit more gravy and some breakfast sausage, and they can even work for a nice breakfast!

These pies are so convenient and easy to use that they work well for any meal. And many families in Australia will eat them all year round, thanks to how versatile they are!

What Goes Into an Aussie Meat Pie?

When you make an Australian meat pie, there are some options for what ingredients you can put inside it. This helps you personalize your meat pie to satisfy your taste buds. However, a few ingredients tend to make their way into most recipes for this kind of Aussie pot pie.

A traditional meat pie starts with some beef. It can be either cubed or minced. Next, onion and garlic add a bit of flavoring and aroma, and vegetables are also added into the mix. Finally, some tomato sauce, mashed potatoes, gravy, and mushy peas are used to top it off and elevate the taste to a whole new level.

The gravy can add a bit more flavoring and can be an excellent addition for gravy lovers. However, if you aren’t a gravy person, these meat pies will still taste amazing! You can toss in some veggies around if you prefer something else for the filling. Options like ground turkey can work, too, though the traditional variety uses beef.

The Aussie meat pie is one of the best options out there for anyone who wants to celebrate the history and culture of Australia. With a bit of cooking and experimenting with the different flavors, you’ll quickly fall in love with these pies and would end up asking for more!

We designed our G’Day Gourmet food truck to be a modernized version of Australia’s classic pie carts and are beyond proud to be sharing our special heritage recipe pies with the world. And if our carts don’t visit your area, fret not, online ordering is available!

2 responses to “What is an Aussie Meat Pie?”